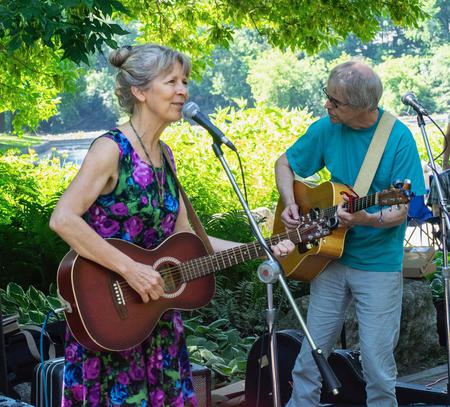 We were delighted to have Tannis Slimmon launch the Tea 'n' Tales 2018 season. Tannis has a gift for engaging an audience with her warmth, voice, and original songs.

Tanis  is a critically acclaimed Canadian musician who has been singing, songwriting, recording, and touring locally, nationally and internationally for over 30 years. In 2008 Tanis was honoured with the Contemporary Vocalist of the Year at the Canadian Folk Music Awards for her album Lucky Blue.

Tannis plays guitar, mandolin, bass and percussion but it is her singing that she is most known for.  Here she is singing duo with Lewis Melville.

Tannis, thank you for again being part of this! The people I come across were asking as early as April whether you would be returning – such was your impact years past. They were excited to hear my affirmative answer.
And it was a joy to have you and Lewis return and to be able to sit back and enjoy your performance. For that, Thank You! (Brian 2018)