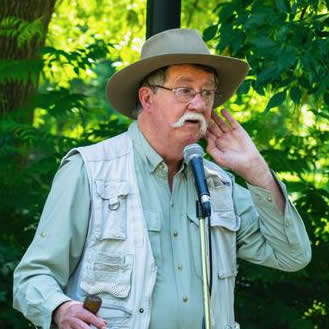 Brian Holstein was born on a dairy farm in rural Australia where he began his teaching career before setting off to see the world. His first and only stop was Brampton, Ontario, where he taught until his retirement.
Moving to Guelph in 1999, he became involved in the community: he has been a character actor for the annual Spirit Walk; he is identified as the boisterous “Tiger” Dunlop and had undertaken the character of Guelph’s Edward Johnson.
A member of the Guelph Storytellers, he began to perform monthly with the group and has arranged storytelling for seniors during the summer Tea ‘n’ Tales Festival.
He travels; sometimes several times each year; collecting memories and stories for his subsequent book and for his grandchildren.
Add to this his writing. He was a Community Editorial writer for the Mercury, his columns tended to focus on a mélange of council observations, city events, and past personalities, as well as a few of his many peeves and experiences. He self-publishes descriptive travelogues of his travels.
As with teaching, Brian enjoys seeing his tales absorbed and processed by his adult audience. Tales with a twist, or a story with a sudden shift in its ending, allow him to delight his listeners.
Contact: briahols@yahoo.com